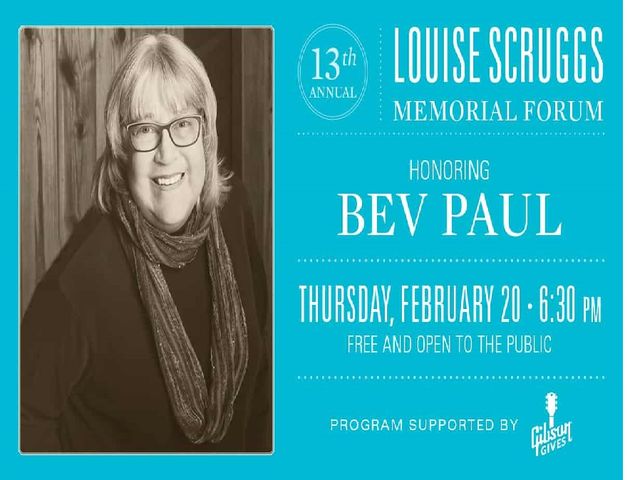 With great record-business acumen and a passion for music, Bev Paul joined the staff of Sugar Hill Records and label founder Barry Poss in 1991. During Paul’s tenure, Sugar Hill emerged as one of the most important independent labels in history. Ricky Skaggs, Jerry Douglas, Sam Bush, Nickel Creek, and Robert Earl Keen released seminal albums on the label, which also embraced singer-songwriters such as Guy Clark and Townes Van Zandt. Paul nurtured many young professional women who would go on to play key roles throughout the music industry. The Louise Scruggs Memorial Forum, made possible by the Gibson Foundation and presented for the first time in 2007, was created to honor a music industry leader who represents the legacy of pioneer Louise Scruggs. Her understanding of music and musical trends, coupled with her formidable business acumen, allowed her to steer her husband Earl Scruggs’s career toward ever-widening audiences. In 1955, she began booking and managing the Flatt & Scruggs show, and she continued to guide her husband’s career until her passing in February 2006. As the first woman in country music to assume these roles, she set new standards for the industry. ​