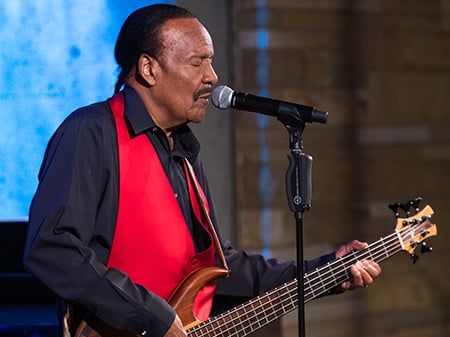 Bandleader, bassist, and vocalist Jimmy Church has been an integral part of Nashville’s R&B community for sixty years. While in his teens, in the late 1950s, Church formed the vocal group the Seniors, who recorded for groundbreaking Nashville label Excello Records. In the early 1960s, he sang in nightclubs with the King Kasuals, whose members included Jimi Hendrix and Billy Cox. As much as any entertainer, Church received valuable, repeated exposure on the pioneering R&B TV shows Night Train and The!!!!Beat. This experience led to Church sharing concert stages with Aretha Franklin, Marvin Gaye, Otis Redding, Jackie Wilson, and other legends. Church has a new album, Straight Outta Old School, and his group remains one of the most popular soul music show bands in the Southeast. Ford Theater. Included with museum admission. Free to museum members. Limited seating.