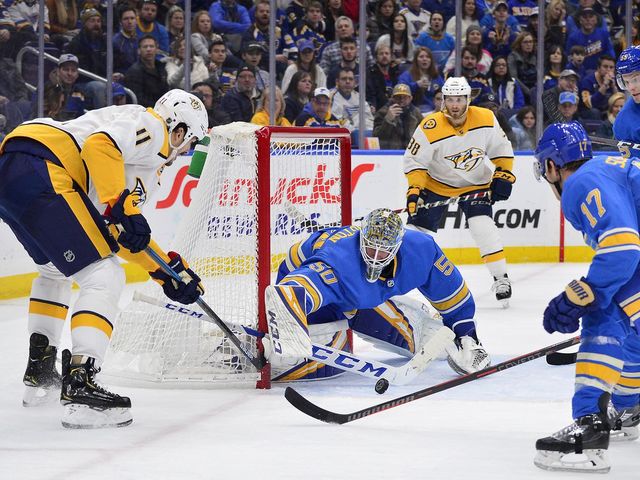 Preds action resumes after the bye week and NHL All-Star Weekend - held this season on Jan. 25 to 26 in St. Louis - on Jan. 27 against Toronto at home; the month's slate concludes with a back-to-back in Washington and New Jersey on Jan. 29 to 30. After a home game against Vegas on the first of February, the Predators head out for a four-game road trip on Feb. 4 to 10 with stops in Winnipeg, Calgary, Edmonton, and Vancouver. A game against the Islanders, a home-and-home with St. Louis and a trip to Chicago are on the docket for the middle of February. Nashville's season-long five-game homestand, set for Feb. 22 to March 2, will see the team take on Columbus, Ottawa, Calgary, Colorado and Edmonton at Bridgestone Arena. March - Nashville's busiest month with 15 games scheduled - includes eight contests against Central Division foes, starting with a trip to Minnesota on March 3 and two consecutive tilts vs. the Stars on March 5 to 7. The second game against Dallas kicks off the team's season-long five-game road trip, which features contests against Montreal, Toronto, Columbus and concludes on March 15 against the Wild. Other games on the March schedule include home tilts against Colorado, Philadelphia, Winnipeg and Los Angeles and trips to Chicago, Arizona, and Colorado. Two of the final three games of the regular season take place in Nashville from April 1 to 4, with the Predators hosting Montreal and Minnesota and traveling to Philadelphia for their final road game on April 2. Nashville closes out its home slate and the 2019-20 season the way it began, with a game against the Wild on April 4. The 2019-20 schedule includes 12 Saturday home dates, featuring visits from the Red Wings, Panthers, Rangers, Blackhawks, Devils, Stars, Sabres, Golden Knights, Blue Jackets, Avalanche, Flyers, and Wild. The Predators will play every Central Division club four times, with the exception of Minnesota and Chicago, who the team will see five times. Nashville Predators vs. St. Louis Blues Sun • Feb 16 • 5:00 PM