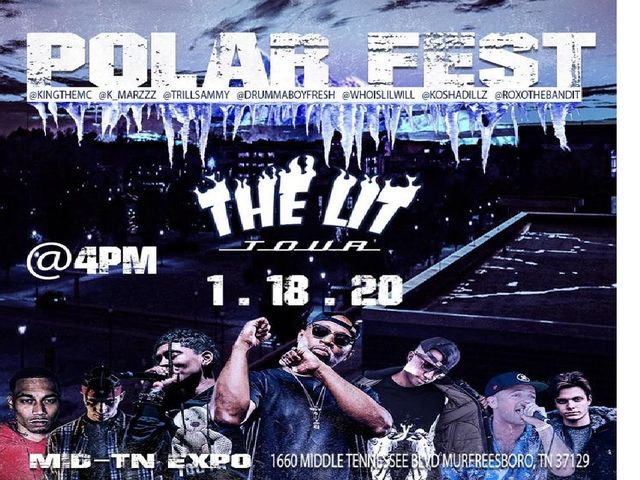 Quality Promotion Team is here to give you, The Biggest Indoor Music Festival In Middle Tennessee!! "The Lit Tour: Polar Fest". Every day this movement is becoming bigger and bigger we just keep on growing!!! You are NOT going to want to miss this experience, it is going to be insane! We are going to have live performances from multiple artists and DJ's, a watch party for UFC 246: Conor McGregor vs. Donald Cerrone, red carpet entrance to a "THE LIT TOUR" photo booth, food, $2.00 bar (until 7:00 p.m.). This is THE LITTLEST 12 hour indoor/outdoor festival in the SouthEast! The CRAZIEST performances by surprise celebrity guests and surprise guest appearances the entire festival. #TheLitTour #PolarFest #1of4 #2020 The lineup includes: Trill Sammy, known for his Billboard Top 100 hit, "Uber Everywhere Remix". 2x Grammy Award Winner Drumma Boy, known for producing the song, "No Hands". Alongside the rest of the Drum Squad and his INSANELY talented artist Lil Will with his hit, "Bag on Me". ABC's music sensation K Marzzz with the release of the single, "Boom" which was part of the EP, "Keep it 1000", and his collab with Soulja Boy, "Buss Down." Kosha Dillz who opened up for Travis Scott's Tour, "Birds eye View" in 2017 and MGK and The Fallout Boys Tour, "Mania Tour" in 2018. Southern Entertainment Nominee King the MC nominated for Album of the year, "The Good. The Bad. The Ugly.", mixtape artist of the year, and spoken word/poet of the year. Lastly but certainly not the least Roxo the Bandit, best known for his feature with 4th Ave, "World" and his CRAZY single, "The Rest."